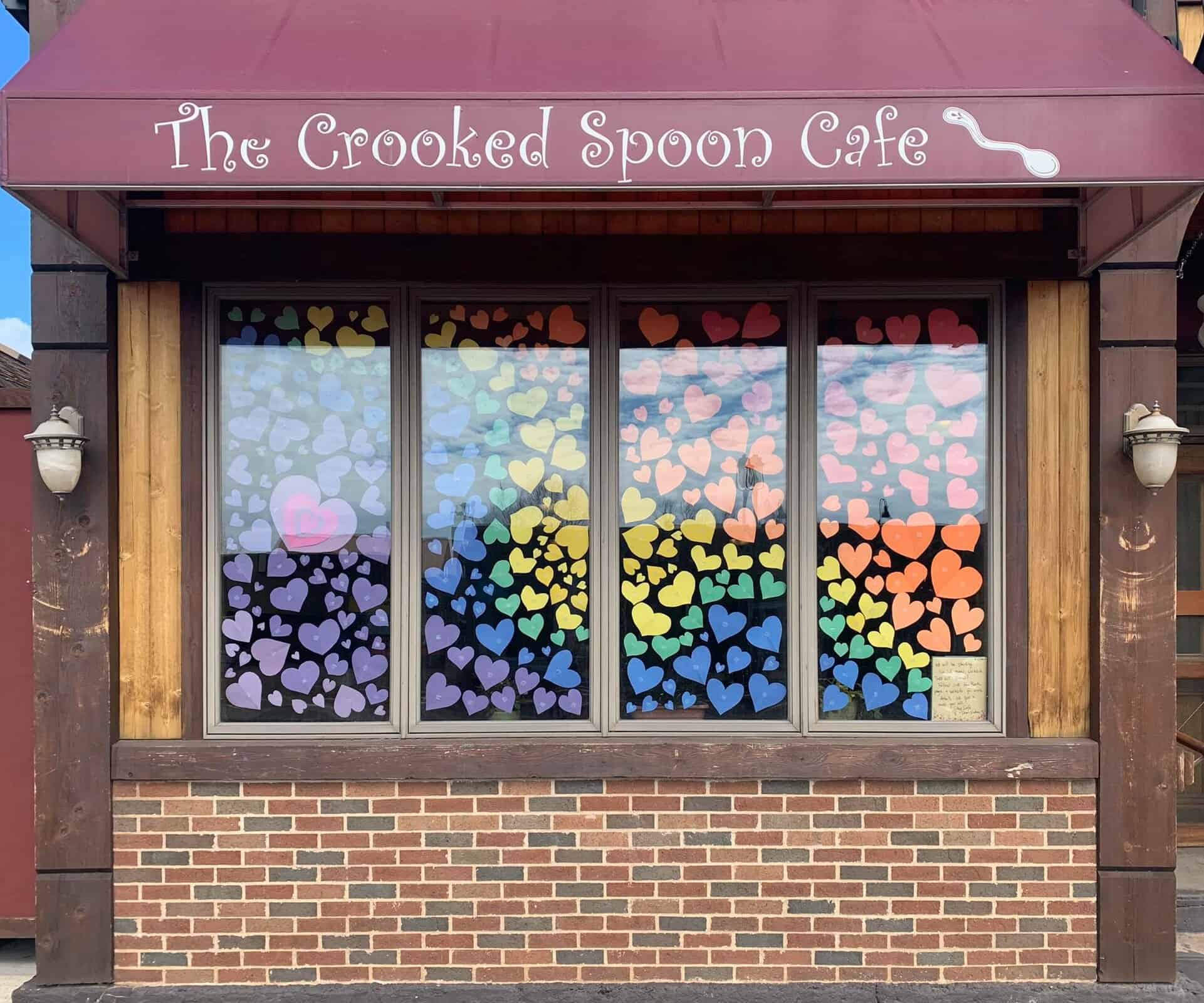 On Monday, April 13th at about 1:30 PM, a fire broke out in the Crooked Spoon Cafe located at 17 W Wisconsin Street. Fed by high winds, the fire quickly spread to the two neighboring businesses- Picnic & Pine and White Pine North. Four hours later, the fire was contained, but the three businesses were a complete loss.

This is the history, and a tribute, to the three buildings and businesses lost in the fire. Credit to Eugene Glader’s Downtown Grand Marais, Volume 1, 2nd Edition for much of the information I was able to gather. I highly recommend Eugene’s entire series of books on Grand Marais. Other information was pieced together through county records and Google and may have errors and omissions. If you have a correction or would like to include a personal story regarding one of the businesses or previous owners, please use the contact us form to submit.  Thank you!

For those who haven’t visited Grand Marais in a few years, you’ll probably remember this as a store called The Attic. The Attic was sold by Tom and Barbara Rawtizer to Beth and Tim Kennedy on May 2nd, 2016. They gave the business to their daughter, Kelsey, to manage. Picnic & Pine was the brainchild of Kelsey Kennedy. A gift shop full of Northwoods whimsy. Gifts, apparel, and more that reflect the feel of the North Shore. Kelsey gave the building a facelift, creating a bright and colorful exterior and filled the outside flower planter with a beautiful array. The new Picnic & Pine was bright, cheerful, and welcoming. A great addition to downtown Grand Marais.

Prior to being Picnic & Pine, the building has been the Attic since the building was purchased by Bruce and Sue Kerfoot in 1985. But, going even further back, the build’s history starts in the 1920 when it was known as Andy’s Pool Hall, owned by a man named Andy Anderson. Andy had an interesting history himself.  According to Susan Backlund-Dixon, “Andy Anderson (A.P.) pool hall owner, was my Grandfather’s C.O. Backlund cousin from Sweden. He spent every holiday meal at our house and we kids adored him. I always wondered why such a sweet man was never married. As I got into my teens I decided to ask him – he lost his bride to be of the Spanish Flu Pandemic as she was coming to the US. He was heartbroken and never married. When he went into the nursing home he became quite popular with the residents and staff – it proved that he truly was special.”

Andy sold the pool hall in 1935 to George Brisson, who went on to change the name to Brisson’s Pool Hall. The building was part pool hall, part restaurant, until it was again sold and became the Northern Lights bar and Lounge sometime in the 1940s.

At some point, the bar became the American Legion post, and would remain that until the American Legion moved into the larger building just a block up 1st Ave West in 1985. That is when the Kerfoots relocated their gift shop, which had previously been known as Artisans Attic, and shortened the name to “The Attic”.  The Kerfoots owned the building and the store for only a year before selling it to their longtime employee Bette McDonald.

Former helper Patrick Mcdonnell share this story about Bette McDonald, “one (of my favorite stories) is my mom’s flower box out front with flowers tied up by little penny nails along the edge. We just get done with all this and hear bang bang bang. Here is a local nameless police officer with a hammer pounding in all the nails! “Bette, we need to get rid of these nails before a hemophiliac sits down here and sues the city.”

Bette would own the building and managed The Attic until 2005 when she sold it to Tom and Barbara Rawtizer. Which brings us back to the 2016 purchase of the building by the Kennedy’s, who owned the building and store until the fire destroyed it.

Helen it seems while quite a visionary and entrepreneur, attempting to capitalize as much as she could from the business and the lot. In 1926 the cafe became the local Greyhound Bus station. Helen also attempted to open a 20-seat theater in the back half of the lot, but that endeavor never came to fruition, and instead, Helen expanded the restaurant into that space.

It seems that Helen owned the building and Jackson’s Cafe until 1939 when it was purchased by her brother Fred Jackson Jr. and his wife, Esther.

In the 1970s Jackson’s Cafe became the local DMV hub for purchasing motor vehicle licenses. Fred Jr. passed away sometime in the 1980s and Ester took over primary ownership. Of all of the owner’s discussed in this article, most stories have emerged about Esther Jackson than any other owner. As Patrick Mcdonnell says “Many days I helped Ma Bette at the Attic. One of the classic events of those days was going to see (Esther) next door. Simple if you were nice to her she was nice to you. Watching folks try to rush her with tabs was REALLY interesting. I’m not even gonna mention watching her try to parallel park in front of the shop… Mr. Duffy would not be amused.” Many others have shared the stories of Esther and how she was known to be quite intimidating, but was really kind to those she knew well. The Cook County Historical Society posted a series of photos on April 14th and many shared their stories on that post.

Esther managed the business until 2003 when she had to close Jackson’s Cafe due to her failing health.

The building sat empty for a couple of years before being purchased by Jim and Jackie Larsen and Glen and Renee Larson. They remodeled the building and then leased the newly renovated restaurant to Sara and Nathan Hingos, who opened the Crooked Spoon Cafe in 2006.Nathan and Sara operated the Crooked Spoon and eventually bought the building from the Larsens in 2011. Recent North Shore visitors will recall that in 2015 the built the second story addition to the back of the building, which held the waiting area for the restaurants. Diner could purchase drinks and appetizers, and enjoy the views of the Grand Marais harbor while waiting for their tables.

Next in the row is White Pine North located at 15 W Wisconsin St. The history of the building also dates back to the early 1920s when the lot was purchased by Ruth Soderberg, who had a small store built on the lot to house her women’s clothing store that was known as Soderberg Dry Goods & Clothing Store in 1923.

In 1933 Ruth purchased the building that is now Joyne’s Ben Franklin and moved her business out of the the 15 W Wisconsin Street location and opened up an ice cream store. She then leased the building to brothers Milford and Ed Humphrey who divided the store in half and each launched their own business. The Great Northern Dry Cleaning and Laundry Service, which was managed by Ed, was on one side of the building, and the Grand Marais Photo Service, which Milford managed, was on the other. In 1935 Ed Humphrey transitioned his side of the store into a men’s clothing store known as the Great Northern Men’s Shop.

In 1936 the two brothers were able to pool together enough money to purchase the building from Ruth. After purchasing the building, both brothers renamed their businesses, with Ed calling his side of the store Humphry Clothing, and Milford renamed his the Photo Art Shop.

Sometime in the mid-40s Ed moved to Duluth to work in the shipyard to support the war effort, leaving Milford the entire store. In 1944 Milford was drafted into the US Army to fight in World War II, and started clearing out the stock in the store in preparation to leave. However, before that could happen the draft age was changed and Milford’s service was no longer required. He was able to revive the business and keep it open through the war.

When World War II ended, Ed returned to Grand Marais. Post-war both businesses thrived, to the point where both were expanded into other buildings, with Humphry’s Clothing moving across the street into the building that is now Sivertson’s Gallery. This meant that Milford’s Photo Art Shop was the sole business left in the building. Milford expanded his store to include a gift and flower shop. Many long-time Grand Marais residents recall Humphry’s store being the only place in the county where you could have a roll of film developed. By 1964, with the two businesses operating separately and successfully, Milford and Ed dissolved their joined businesses and Milford took over sole ownership of the store and building.

Milford ran his business successfully until the 1970s when he was nearing retirement age. He had hoped that his son, Steve, would take over ownership of the building and management of the store, but, tragically, Steve died in a motorcycle accident in 1973. This left Milford, nearing retirement age, with no one to pass the store onto, so he started seeking out a new owner. In 1974 the Photo Art Shop was purchased by Jim and Jackie Larson who changed the name of the business to White Pine North.

Jim and Jackie managed White Pine North until January of 2020 when the sold the business to Tyler and Jessica Dean. The Larson’s maintained ownership of the building.

Things seemed to be going well for Tyler and Jessica in their first couple of months in operation. But the COVID-19 pandemic forced the closure of the store in March of 2020. Then, on April 13th, the store burned to the ground. Luckily, just a year and a half later, Tyler and Jessica were able to purchase Grand Marais landmark store Joyne’s Ben Franklin from the Joyne’s family. They have maintained the name of the store, but have added their signature White Pine North coffee bar.

Gone But Not Forgotten

There is a lot more to the history of these three buildings than just the people who owned them and the businesses that were operated within them. This is just what we have to put on paper. The stories of those who frequented or even just visited these businesses are not included here, but are very much a part of the history.

A GoFundMe was set up to help support the owners of all three businesses destroyed in the fire. It raised over $58,000.

Listen to the Exploring the North Shore Podcast, Episode 25: History Lesson #3 – Things We Lost in the Fire: 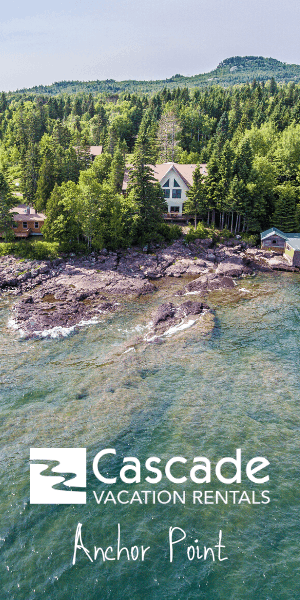 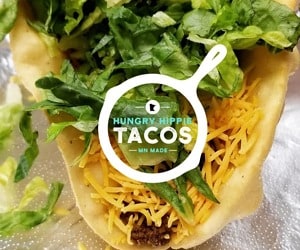